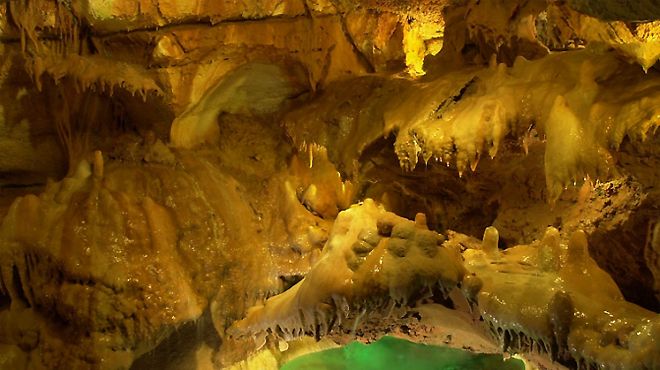 The Grutas da Moeda (the Coin Caves) of São Mamede, Fatima, were discovered in 1971 by two hunters while chasing a fox. Once in the cave, they were overcome with curiosity which led them to explore the area more thoroughly. To their amazement, they soon found the "Shepherd's Chamber", a chamber full of the most fantastic limestone formations. For nearly two months the two men continued to dig away at the narrow cracks which led on from the first cave, slowly discovering the other chambers and galleries included today in the Grutas da Moeda.

Soon measures were taken to make use of the cave as a tourist attraction; geologists and other technicians were contracted to rigorously maintain the natural features of the cave, including the mountain landscape above ground. The names given to the chambers are very suggestive of the images that each one presents to the visitor: Nativity Scene, Shepherd, Cascade, Virgin, Red Dome, Marine, Flawed Chapel, Wedding Cake and Spring of Tears.
Contacts