About Useful information Feedback from users 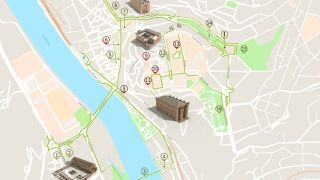 Standing on the banks of the River Mondego, Coimbra is a very old city and visiting it is something of a history lesson, since you can travel across the centuries as you visit its remarkably rich heritage.

But the city is best known for other lessons, which take place in its university, the oldest in Portugal and one of the oldest in Europe; it is the source of the most animated academic traditions in the country and of the name, "City of Students".

Do this route with the map

And indeed, it is in the University situated in the highest part of the city, an area classified as World Heritage by UNESCO, that the route we propose will start. The cluster of buildings is spread out around the Pátio das Escolas, a broad, flat courtyard that allows unhindered movement for wheelchair users. Right away, access to the main building - the Rectory (Reitoria) (10) – is via a flight of steps that cannot be climbed unaided, but once inside the areas are spacious and obstacle-free. Absolutely not to be missed is the visit to the Joanine Library (Biblioteca Joanina) (11), which can be entered via a ramp. Inside you will find more than 300 000 works displayed in beautiful gilded bookshelves. These can be admired from the ground floor where there are very few barriers to moving around, although the upper floors are only accessible via a staircase.

Close by is the New Cathedral (Sé Nova) (13), a building in the Mannerist style but whose access by steps up to the door makes it impossible for wheelchair users to enter without help. Meanwhile, in the Machado de Castro National Museum (Museu Nacional Machado de Castro) (12) everyone can appreciate the notable collection of jewellery, sculpture and paintings. However, one of the main attractions of this museum, the Roman Cryptoporticus, in not accessible, but it can be viewed in detail in the multimedia booth in 360o imaging. 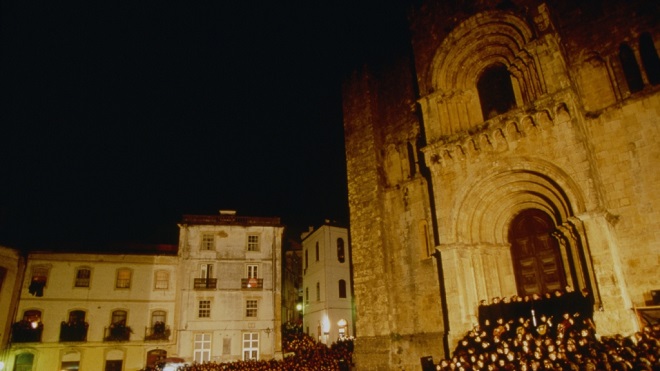 This part of the city has narrow streets that become steeper as you go towards the city centre (Baixa). This makes it difficult to get around and impedes the visit to the Old Cathedral (Sé Velha) (6). This is one of Coimbra's main monuments, but its flight of steps is impossible to climb without help. These steps provide the stage for serenades performed by students dressed in black cloaks who sing Coimbra fado, especially in the period at the end of the academic year. But listening to Coimbra fado is an unmissable experience and you can enjoy it in various bars around the city. 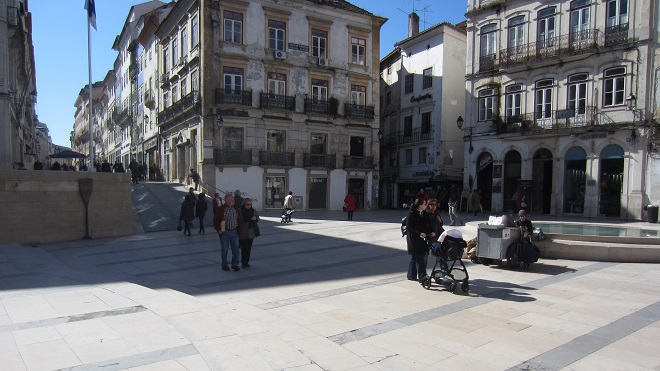 As an alternative we suggest that you go down to the city centre by means of the Market Lift (Elevador do mercado), which you can get in Rua Padre António Viera, near the New Cathedral. When you get out, next to the city market, you have two options. If you fancy strolling through a green space then turn right and head up the Avenida Sá da Bandeira whose central strip is a continuous garden up as far as the Praça da República. Here you find the Sereia Garden (Jardim da Sereia) (15), a really pleasant area, which extends through the Santa Cruz Park and has a slope and some obstacles to moving around it. Another must-see green space is the Botanical Garden (Jardim Botânico) (16), a completely accessible area which is accessed from the Rua Almeida Garrett and further on by the Rua de Tomar. 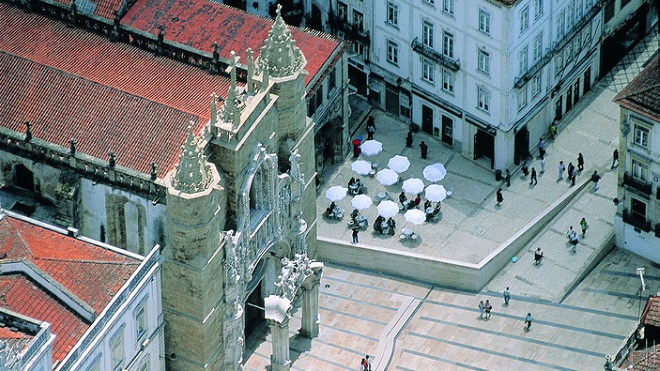 If when you come out of the Market Lift (Elevador do Mercado) you head in the opposite direction (to the left) you'll get to know the town centre, a livelier area with more shops. For this you should follow the Rua Olímpio Nicolau Rui Fernandes, which terminates in the Rua Sofia (8), also classified as World Heritage and along which several colleges belonging to the University are located. Turn left for the Praça 8 de Maio to visit the Santa Cruz Church (Igreja de Santa Cruz) (7), which you cannot help but notice for its strikingly handsome doorway. Within its fully accessible interior are the tombs of the first kings of Portugal. The route carries on towards the Largo da Portagem, passing by the São Tiago Church (Igreja de São Tiago) (6), a Gothic building with very poor accessibility since it is flanked by steps, and by the Praça do Comércio (5) a square filled with shops and terraces that somewhat impede movement.

The itinerary continues on the other side of the River Mondego, so you should cross the Santa Clara Bridge (Ponte de Santa Clara).  A few metres ahead, on the left, you come to the Monastery of Santa Clara-a-Velha (Mosteiro de Santa Clara-a-Velha) (2), built in the 13th century. Regularly invaded by floods from the river that have left deep scars, the monument, which is totally accessible on the ground floor, still retains an area of ruins and a unique atmosphere. Beside it is Portugal dos Pequenitos (1), a theme park with wide spaces and gardens where you will find miniature replicas of a number of Portuguese monuments and traditional houses.

We suggest that you carry on alongside the river, taking the Avenida Inês de Castro and the Choupalinho Park (Parque do Choupalinho) and enjoy the green area beside the Mondego. You can cross the river by the Pedro and Inês Bridge (Ponte Pedro e Inês) (3), a footbridge which is innovative in structure and design and leads to the Mondego Green Park (Parque Verde do Mondego) (4). Our visit ends here, beside the river in this really attractive area, with terraces, places for leisure and sports activities and the Central Portugal Pavilion (Pavilhão Centro de Portugal), created by the architects Siza Vieira and Souto de Moura. It is the venue for a number of cultural events.

The municipal company SMTUC (Coimbra Municipal Urban Transport Services) has buses adapted for people with reduced mobility, fitted with access ramps, spacious interiors, reserved places, warning sounds and lights, and Braille on the stop buttons. The bus shelters have information screens showing the waiting time for the next bus.
Further information at www.smtuc.pt

"Pantufinhas" Bus
SMTUC has fully accessible buses that also circulate in pedestrian areas.
The buses are fitted with access ramps for people with special needs, spacious interiors, places reserved for people with reduced mobility, warning sounds and lights, and Braille on the stop buttons. These buses do not have pre-established stops; they stop whenever passengers signal that they want to get off.

Elevador do Mercado (Market Lift)
Getting between the town centre and the University (which is in the upper part of the city) requires negotiating steeply sloping streets, and so the Market Lift is the best option for this trip. It links the Avenida Sá da Bandeira and the Rua Padre António Vieira.
The lift is fully adapted; the absence of uneven parts at its entrance and stopping points en route make the whole journey easy and comfortable.
http://www.smtuc.pt/servicos/index_elevador.php

Coimbra station has an entrance with a ramp on the right-hand side of the building, with a handrail, and the ticket offices, with lowered counters, are designed for people with impaired mobility. The interior is spacious. There are automatic ticket dispensers that can be reached by a sideways approach.
The station has an adapted WC, but it is not accessible since access is via a flight of steps.
The Portuguese Train Service, the CP-Comboios de Portugal, offers a centralised Integrated Mobility Service (SIM - Serviço Integrado de Mobilidade), accessed by telephone (+351) 707 210 746 (707 210 SIM), which is available 24 hours a day for 365 days a year, for both information and services. This service will enable passengers with special requirements to get information on accessibility on trains and at stations, assistance for embarking, during the journey and disembarking, among other services.
For more details, visit:  www.cp.pt 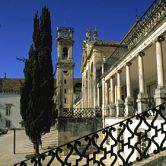 On the banks of the river Mondego, Coimbra is famous for (...)