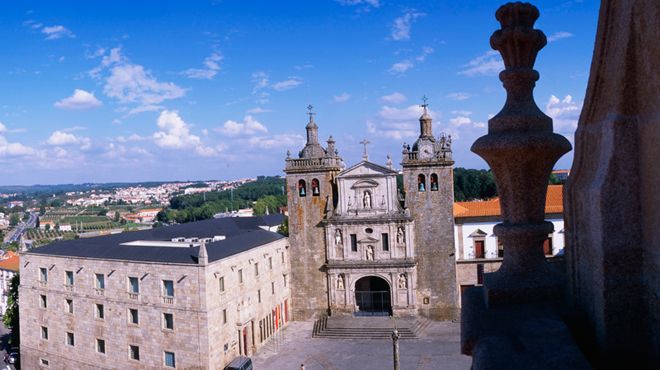 St. Mary of the Assumption is its patron saint.

With large towers that give it the look of a fortified church set on a promontory, the magnificence of this cathedral is a focal point of the city, even from a distance. It is also one of its oldest buildings. It was built on the spot where a primitive temple of the Suevo-Visigothic era once stood, whose structure was recently revealed by archaeological excavations. It began to take shape in the 12th century, under the first king of Portugal, D. Afonso Henriques, and underwent a profound renovation in the 13th century, during the reign of D. Dinis. Work spanned many years and the whole building comprises elements from different eras.

The current Mannerist facade was erected in the middle of the 17th century. To replace a Renaissance facade that collapsed in 1635 and destroyed the Manueline portal, meanwhile constructed. An interesting detail is that it has six niches with stone sculptures. At the top there is Santa Maria da Assunção, the patroness of the Cathedral. Below, also in the middle, the image of St. Teotonio, a man of many virtues who was Prior of the Cathedral between 1112 and 1119 and is the patron of the city of Viseu. In the side niches are the four evangelists with the respective symbols: St. Mark, St. Luke, St. John and St. Matthew.

But the most interesting thing in this cathedral is its interior, namely the vault where the cross-shaped ribs were carved into the stone as if they were a thick rope with a knot halfway along; nautical attributes that are very Manueline in style, which give it a refined elegance. The vaults of the canopies are topped by ançã stone fleurons, which bear the hallmarks of kings and bishops’ coats of arms.

The main chapel, modified in the 18th century, was once decorated with the beautiful altarpiece of Vasco Fernandes (Grão Vasco) that represented scenes from the life of Christ, and is now stored in the Grão Vasco Museum. The present Baroque altarpiece, which embodies the fashionable tastes at the time of D. João V, is by Francisco Machado. The elegant 18th century chancel is made from jacaranda wood, brought from Brazil, carved and gilded.

To the side there is a corridor covered with 18th century tiles which gives access to the sacristy, built in 1574, and enriched with paintings on the wooden ceiling. In the centre is the shield of the Bishop D. Jorge de Ataíde, mentor of this construction. The walls of the sacristy are completely covered with 17th century polychrome tiles.

To complete this tour of the Cathedral, visit the cloister, which is accessed via the church, which was built by Bishop Miguel da Silva (one of the initiators of the Renaissance style in Portugal and guardian of the painter Grão Vasco) and the Treasure-Museum of the Cathedral, which houses two 13th-century reliquaries of the School of Limoges, and a ward belonging to D. Miguel da Silva.